Mind the Gap (and the sheep) 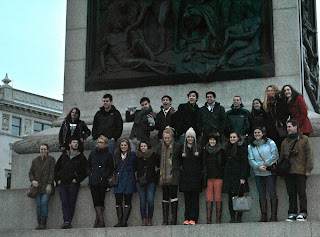 Here's my epic blog post about my adventures in London and Scotland. Ready, set... Go!

Sunday: we flew out of CPH at noon and hit the ground running. We quickly checked into the Holiday Inn and went out to explore London. I was so happy Liz was my roommate because we have two classes together and are friends. We went to the National Gallery of Portraits for a tour led by the wonderful Anders. He studied fashion and semiotics so he was able to explain to us how the persons outfit represented power and status. He was such a good tour guide, people joined us along the way. 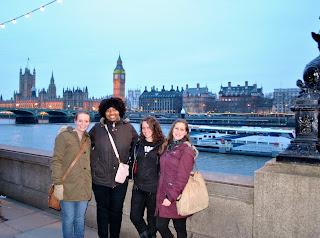 Anders took us to trafalgar square where we took a class picture. We walked by Big Ben and Parliament on our way to the London Eye. We went up on the Eye and it was of course really cool. We went at night and last time I went was at night too. Is hard for pictures to turn out in there at night.
For dinner, we had Indian food at a cool restaurant that had seats upstairs and were only accessible by individual ladders. 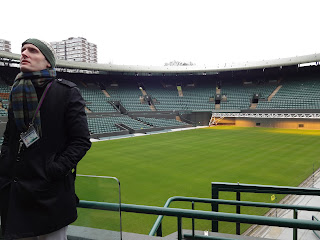 Monday: Every morning we had an English breakfast buffet at the hotel. Today we took a coach bus to Wimbledon. We got there an hour early so we stopped at Starbucks for free wi fi and coffee paid by DIS. Wimbledon was really cool because we had a guided tour through the most famous tennis courts and learned how they brand themselves. Next time Wimbledon happens, I'll be sure to watch.

For lunch, we ate at a Lebanese restaurant where they kept on bringing out delicious dishes of food. Our tour guide met us there and walked us over to Hampton Court Palace. The tour guide was Scottish and he joked that if we couldn't understand him to just close our eyes and picture Shrek. He was hilarious. 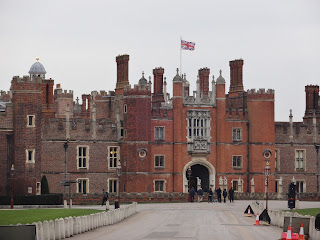 Me and my friends got dinner at the pub by our hotel. We ordered fish and chips of course. We ended up going to that pub a lot because they had free wi fi and we loved Kyle, the cute manager.

Tuesday: We were divided into groups to do a scavenger hunt throughout London. Most groups, like mine, only made it to one or two stops. 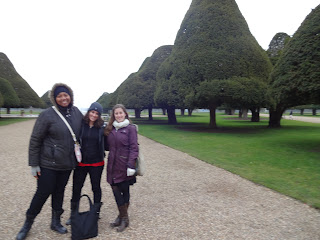 After lunch, we went to Bloomberg. We had to get ID tags with our picture on them and then we go upstairs and he tells us we can help ourselves to free food and drinks. So we all stuff our pockets with cookies and chips. Bloomberg was impressive. They had huge salt water fish tanks on each floor. I learned Bloomberg helps give people the information they need to make investments. 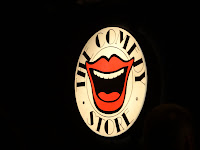 Our group went off to meet the people at Contagious magazine. They make a quarterly magazine for advertising and marketing directors about upcoming trends. The advice in there is so good they can get away with charging a thousand dollars per issue. Wow.
In the evening, we went to a comedy show. The comedians were not afraid to offend, thats for sure. 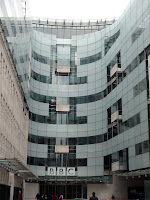 Wednesday: Schillings was my favorite visit that we went to. It's a law firm that specializes in defamation law. So like when a tabloid published something negative about Kate Winslet, they were able to sue and get a public apology. He told us this type of law doesn't exist in America because of how our law system and journalistic standards are set up. It was still really interesting. 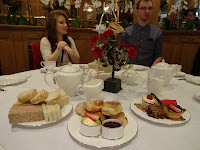 We went to BBC where a woman talked to us about how they do their investigative journalism. She had us discuss the ethics behind using hidden cameras.

Then we had afternoon tea at a fancy hotel. Not only did we get delicious tea with milk and sugar, but also finger sandwiches, scones, pastries, and more.

In the evening, Shyniece and I saw the Spice Girls musical- Viva Forever because it was cheap and there were tickets available 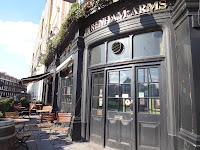 Thursday: This day we had a social media workshop. I didn't learn much just because he didn't tell us any new info and his info was geared toward old business men. The presenter reminded me of Gill from The Simpsons. From there, we were let loose in London to find a business and ask about how they use social media. We had to come up with a presentation about the business and suggest ways they could improve their social media. My group went to the pub by our hotel and interviewed Kyle about how he uses Facebook and Twitter. We ended up winning the challenge since our presentation was the best! 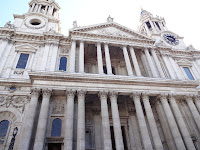 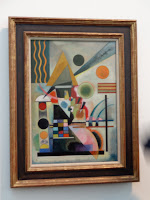 Friday: We walked by St. Pauls Cathedral on our way to Tate Modern. We had a guided tour through the museum, which I enjoyed. They have some famous pieces there plus I like modern art. We were supposed to eat dinner in Tate Modern but they lost our reservations or something so instead we ate at a wonderful restaurant by the Globe theatre.


Me and Grace went to the National Gallery to check out some last minute art works.
I caught the bus with my class to the airport even though I wasn't flying out with them. I couldn't turn down a free ride to the airport. My flight left an hour later than theres so I just had more time to shop around London Heathrow.

When I touched down in Glasgow, I wasn't sure how to get to Stirling so I got into a taxi and asked him to take me to the train station. From there I took the train to Stirling, where I met Gretchen. I was so happy to see her! 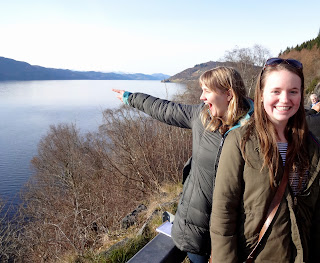 Saturday: We took the train to Glasgow and did a tourist double decker bus tour around the city. We stopped at the Glasgow school of art and took a tour there. Our tour guide was an architecture student so we learned a lot about architecture, which I enjoyed because I didn't know much about it. After the tour we went to the Willow Tea shop for afternoon tea. Delicious. We did some shopping around the city, went to a historic candy shop and then it was time to catch the train to Inverness. When we arrived there, we got out our map and within one minute these friendly tipsy Scottish men came to help point us in the right direction. We checked into our cute bed and breakfast and the manager recommended some places for us to eat. It was late at night so he rushed us out to try and catch a place before they closed their kitchen. We ended up eating at a chinese buffet and then going to a bar called Hoot a nannys. On the lower floor they had traditional Scottish music while upstairs they had an alternative rock band. It was like the best of both worlds. We loved that bar and had a fun time. 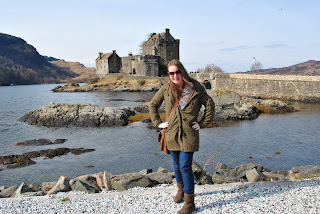 Sunday: We woke up and went downstairs to eat breakfast. There were scones, croissants, cereal, muffins and juice. The owner came through the kitchen and kindly asked if we wanted pancakes, eggs, toast, cheese and ham. Confused, we said yes. As we chowed down on the muffins and scones, he sporadically popped out of the kitchen to give us coffee, crepes (their version of pancakes), soft boiled eggs, and more. It was a feast! It was just us, a couple from Spain and a woman named Debbie staying at the B&B. We were sad to check out and leave, after such a nice experience there. 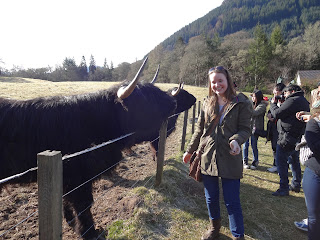 We spent the day doing a bus tour through the Highlands. We were in a sixteen person bus, driving through the mountains, frequently stopping for pictures and bathrooms. We went to the Eilean Donan Castle, the island of Skye and saw sheep and most importantly Highland cows. They might be my new third favorite animal (horse being number one and dog number 2).
We ate dinner at a nice Italian place because all the pubs were crowded. 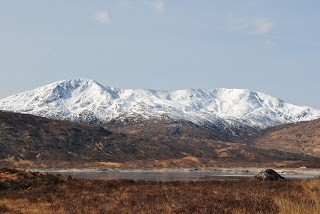 Monday: we had to wake up at the butt crack of dawn to catch the 7am train back to Stirling. It was so marvelous to see the countryside by train at dawn. We didn't have a lot of time so Gretchen quickly showed me the mall of Stirling and University of Stirling's campus. I caught the train to Edinbourgh and then the Airlink bus to the airport. On the bus I looked at my iPhone and saw it was 2. My plane was supposed to leave at 3:15. So I was freaking out that I would miss my plane. I rushed through check in and security only to realize that it was only one thirty. The time change threw me off. But it all worked out and I was plenty early for my plane. Nothing went wrong on my trip to Scotland so I think my mind created something to freak out about. Haha. 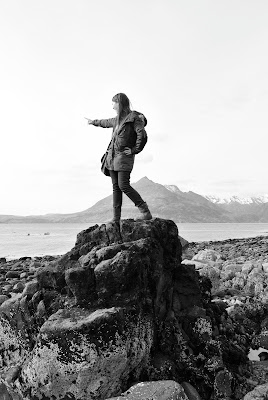 America's Next Top Model in Scotland :-)