Hello there, I normally religiously blog every day in the evening but since I was away for three days, I haven’t written in a while.

Me and my Strategic Communication class went to Odense and Arhus in Western Denmark on Monday, Tuesday and Wednesday. It was part cultural experience, part educational experience, and part fun.

On Monday, we met in Copenhagen at 8:15 to board a huge travel bus. I got there at like 8:18 so most of the window seats were taken. I sat next to a girl I’d been talking to and was friends with and accepted my aisle seat. Literally everyone but me slept on the bus on the way over. I played MegaRun on my ipad, listened to music, journal, and looked out the window.

We arrived in Odense around 11am and took a tour of TV2, which is Denmark’s number one tv station.
Fun facts: they are only allowed to show 12mins of commercial per hour, they are owned my the Danish government, they film the evening news there, their headquarters used to be a cattle marketplace, and recently the Danish government gave them a loan to help them not go bankrupt. It was a really cool tour. We saw the Danish news broadcasters, who I’m sure are the Danish Katie Couric and Matt Laurer but we didn’t know them. At the end of the tour, we got a free pen. Sweet!


We boarded the bus and went to a cool shopping plaza area (called Town Hall Square) where we had lunch on our own. I went with two girls who I was kinda friends with and we struggled to find a cheap place within one hour. We ended up choosing this sketchy burrito hole in the wall place. It took fifteen minutes to get the food and then my burrito had frozen chicken in it. Parts of the burrito were hot, most was cold. We had to eat it while walking back or else be late so I didn’t get to complain. I only ate half of it and threw the rest away. Good thing I had a big breakfast.
A DIS professor (who I met on the Amazing Race thing we did) gave us a walking tour about Hans Christian Anderson. It wasn’t the greatest tour because it was like, “Here is the church where he was confirmed. Here is the place where his grandpa lived. This is the house he was born in. Oh and we don’t have time to go to the actual Hans Christian Anderson museum house.” I mean I learned some things and it was neat to walk around and see churches and old houses.

The bus then drove us to Arhus which was maybe an hour away. There, we checked into our hotel/ hostel which was called Cabin Arhus. It was sometimes called either name. The lobby was really nice, with a spiral staircase but our room was a total broom closet. It was the size of a room on a cruise ship. It even had the pull down bunk bed, which I volunteered to sleep in.  The bathroom shower was a shower curtain around the floor and a drain in the middle. I’m proud of myself for not complaining about how small the room was. It had a nice view of a canal and was on the first floor so those were positives. 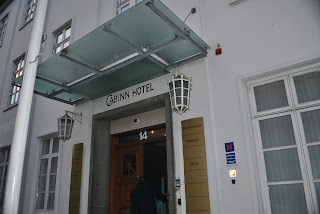 Our hotel from the outside 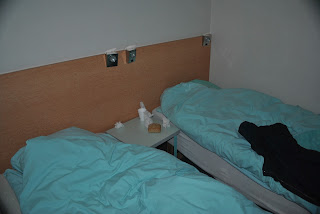 The two beds that took up the whole room.

At 18:30 we went to a group dinner at Grappa which was a fancy Italian restaurant. We all had gnocchi ( pronounced like  nohky) with shrimp, a fancy delicious sherbert and ice cream, and either one wine or beer. It was a great dinner because the food was superb and I sat by cool people that I felt comfortable talking to.

After dinner, the majority of us wanted to “go out.” We ended up finding this English pub that was empty so we grabbed a large table and ordered some drinks. I got a cider because they taste great. I didn’t have the best time because I sat in the middle between the one side which was all sorority girls talking about sorority stuff and the other side I couldn’t hear very well and felt too far away. I ended up chatting with the girl across from me. It was kinda loud so I couldn’t hear her very well.

The next morning, we had a continental breakfast at the hotel at 9:30. At 10:30 we arrived at the Municipality of Aarhus to meet with a civil servant of the city. He told us all about how they have tried to brand the city, failed slogans (like City of the wind, city of smiles, etc) and how excited they were to be named the cultural capital of the EU for 2017. Our tour around the building included seeing where people get married if they want to there and where they hold city council meetings.


At 11:45, we ate a group lunch at Raadhuus Kafeen. We had a traditional Danish lunch of smorrebrod which is a fancy open sandwich. I really liked it. For desert we had a heavenly chocolate cake.


In the afternoon we split into two groups. One group say a film production company and the other saw a freelance journalist and graphic designer. Guess which group I was in? Both freelancers openly admitted that they aren’t rich but they are happy, which I suppose was nice to hear.

At 3:15, we went to ARoS which was my second favorite part of the trip. It’s a really cool unique modern art museum. The best part of the museum was the color walk on the 8th floor. You walk around in a circle and can see the city through different colors. Everyone was taking so many photos, including me. 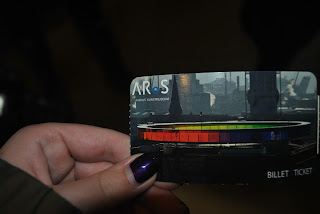 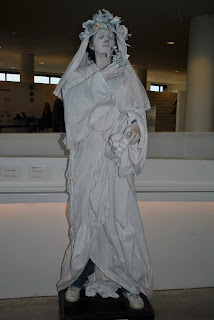 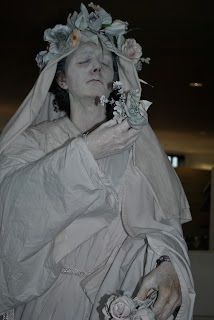 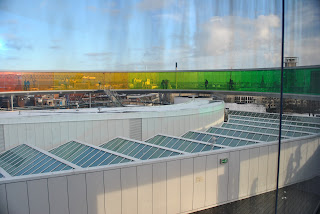 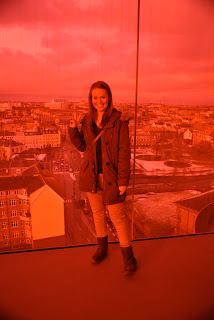 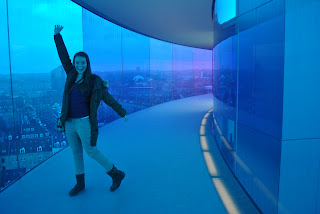 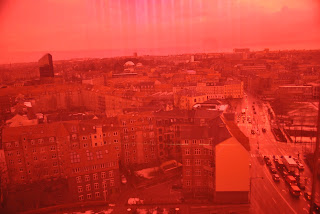 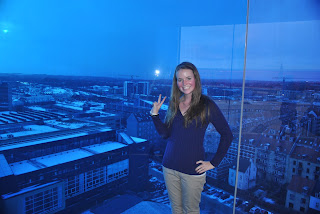 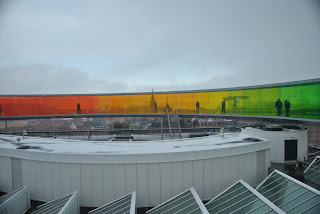 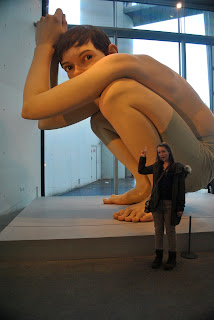 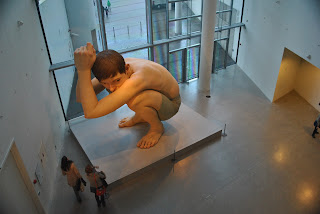 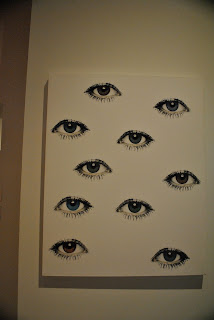 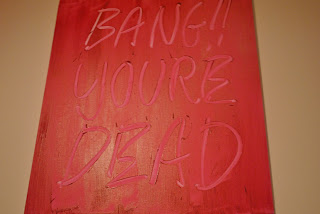 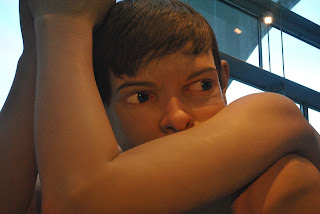 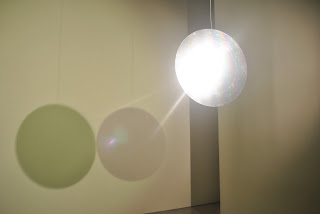 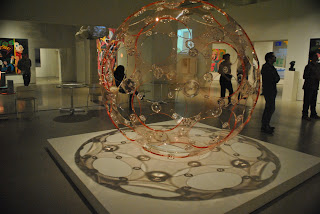 We only had an hour and a half at the museum so we had to rush through exhibits like the one about Edward Munch (the painter who did The Scream, but that one wasn’t there), the experimental art, and the modern art. The pieces we saw were really cool and interesting. I hope to go back to that museum sometime.

Our last event of the night was indoor go karting at a place called Racehall Go Karting. We had to wear race suits, face masks, gloves and a helmet, all which were quite snazzy. The safety video was all in Danish so the teenager working there had to come in after the video and answer our questions about what the flags meant. The video showed a guy flipping someone off and another guy throwing up in a trash can so we didn't need to understand Danish to get those messages. We had assigned numbers that matched what cars to go in, because they kept track of who was winning and losing. The cars went so fast! I think he said 60km an hour. At first, I was really aggressive. Like hitting other cars on purpose and accidently and taking turns really tight. The worker teenager gave me the hand signal that meant, settle down there or else I’ll pull you out of the race. So I had to try harder not to hit people and slow it down a little. I figured out it was best to accelerate before and after the turn but brake during the turn. I think I came in 11th place. I was just happy, I beat our professor. Some girls complained that they hated the whole experience but I loved it. It was a blast speeding through the track and passing people. I know my dad would like that place.

In the evening, we had dinner on our own. Me and three girls I was friends with and a large group of sorority girls went to eat at an American restaurant. All the sorority girls got chicken tenders and fries. Me and Shyniece got the salad bar (that ironically came with fries) for a not- bargain price of 109kr.

Wednesday, we got an early start. We went to a lecture at Arhus University called “Online and Social Media Activism: Does it affect the stakeholder landscape?” It was actually an awful lecture because it was very biased and she talked about very complex issues surrounding corporate activism. No one really liked the lecture.
We ate lunch in rural Denmark (which is beautiful) and it was a Danish lunch buffet. I discovered I love herring.

Our last activity of the trip was a guided visit to Jelling Stones. It’s supposed to be like Denmark’s stone hinge. It was built by Vikings a long long time ago and is featured on the Danish passport. The coolest part was climbing up a big hill, taking a group picture, and collectively struggling to go back down the hill on the icy staircase. 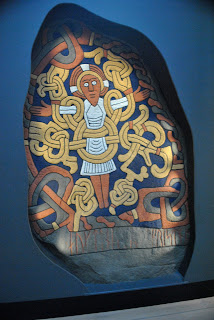 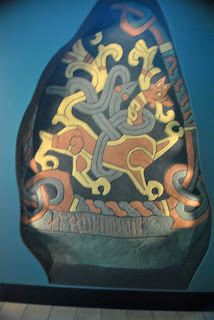 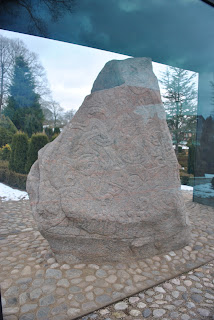 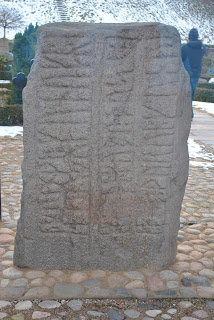 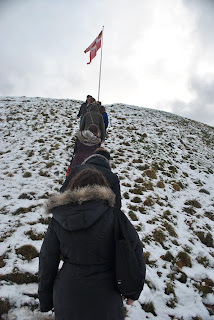 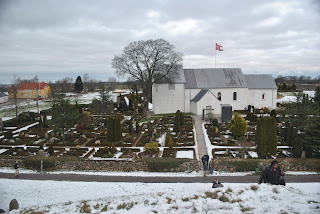 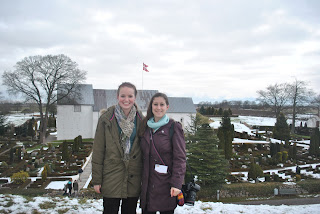 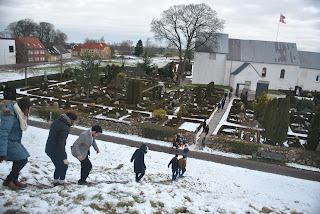